How much pushback after backsliding? Opposition to autocratization in Southeast Asia

This talk aims to contribute to the understanding of opposition to autocratization – regimes exercising political power in an increasingly arbitrary and repressive manner that restricts contestation and participation – by analyzing four recent Southeast Asian cases. One influential explanation focuses on remaining electoral, state institutional, and civil societal forms of democratic accountability despite autocratization, with the greater these residual constraints, the stronger pushback is likely to be. However, this is the opposite of what can be observed in this region. Indonesia - in which institutions of democratic accountability remain most intact – has experienced much less pushback to democratic backsliding framed as a response to a growing Islamist-populist threat than has Myanmar in which the dismantling of key institutional structures justified by supposed electoral fraud in the February 2021 coup sparked a national civilian uprising. Similarly, in the Philippines there has been only occasional and limited opposition to president Duterte’s executive aggrandizement though his rule has left many institutional constraints still in place. In Thailand, by contrast, although the country’s military-monarchical rulers dismantled the country’s institutions after a coup and held manipulated elections only years later, there has been much greater pushback with stronger electoral opposition and large protests. Building on a discussion of differences between military and civilian autocratizers as well as between liberal and illiberal oppositionists, it is argued that the key to understanding variations in opposition pushback (but not necessarily the chances of its success) is the ability of antiregime forces to portray growing illiberalism as also being anti-democratic.

Mark R. Thompson is head and professor of politics, Department of Asian and International Studies and Director, Southeast Asia Research Centre (SEARC) at the City University of Hong Kong. He is past president of the Hong Kong Political Science Association and the Asian Political and International Studies Association. He previously held permanent positions in the UK and Germany before coming to the City University of Hong Kong in 2010. He has held visiting positions in Japan, Thailand, and the Philippines and was Lee Kong Chian Distinguished Fellow for Southeast Asian Studies at the National University of Singapore and Stanford University. He has received several major external grants in Germany and Hong Kong. The author or editor of 10 books and over 100 articles and chapters, his research focuses on democratisation, autocratisation, and leadership in Southeast Asia. 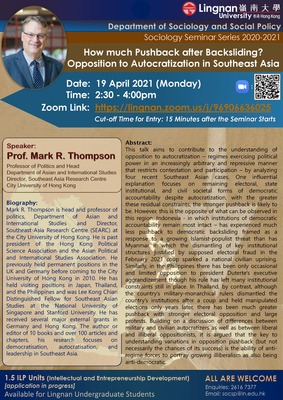 Thompson, M. R. (2021, April 19). How much pushback after backsliding? Opposition to autocratization in Southeast Asia [Video podcast]. Retrieved from https://commons.ln.edu.hk/videos/865/