What is “Performance Studies” and what do you do with it?

How do scholars based in the Asia-Pacific adapt and improvise to make sense of performance studies’ inherently transnational and emancipatory premises, yet decenter its Euro-American pedigree as an institutionalized discipline? This colloquium invites three scholars from the Pacific-Asian region to lead a colloquium on teaching and researching in the emerging discipline of performance studies. There has been a series of sustained interests in, critique on, and reconsideration of applying performance studies methods and methodologies to the Asian context and Asian performance traditions. Yet the actual teaching and researching, i.e. institutional practices in the academe, merit further discussions that respond to the priorities unique to Asian universities in the neoliberal climate. In light of Department of Cultural Studies’ continued efforts to introduce the field of performance studies at Lingnan, the colloquium will also address specific questions, opportunities, and challenges emerging from performance studies research and teaching in the Hong Kong’s cultural context.

“Performance Studies x Cultural Studies” Colloquium speaks to a broader community of scholars, performance practitioners, and general public in Hong Kong interested in performance as an object of analysis and method of inquiry. The first session is led by the three invitees in a panel discussion format based on their respective research interests and institutional background. The second half is led by the Cultural Studies department’s own faculty members as discussants addressing the most salient issues emerging from the first session as well as their own methodological concerns from performance-related research and teaching within cultural studies.

Stephen Chan Ching Kiu is a professor of cultural studies at Lingnan University, and was the founding director of its BA Cultural Studies programme in 1999. Between 2003 and 2008, he was the inaugural Director of the Master of Cultural Studies (MCS), a self-financed programme taught primarily to cultural practitioners in education, media, and NGO services. In 2008 he received the Dr. and Mrs. James Tak Wu Award for Outstanding Service. Together with Li Siu-leung, Chan introduced the new performance studies minor to the BA in Cultural Studies programme and the performance studies concentration in the MCS. He writes extensively on Hong Kong culture, film, identity narratives and performance, and also serves as Chair of the Association for Cultural Studies.

Anjeline De Dios is an assistant professor of cultural studies at Lingnan University. As a cultural geographer, she researches the intersections of migration, mobilities, creative/cultural labour, ethnography, and music. Prior to joining the Department of Cultural Studies, she was a Postdoctoral Fellow at the Asia Research Institute, National University of Singapore. She is co-editor (with Lily Kong) of The Elgar Handbook Geographies of Creativity (Edward Elgar, forthcoming 2019), and is working on a booklength manuscript based on her ethnographic dissertation on the labour geographies of overseas Filipino musicians. Parallel to her academic work, Anjeline is also a chant performer who writes and collaborates with artists and facilitators in contexts of improvisational performance (jazz, dance, sound art), and community meditation.

Hyunjung Lee is currently a Professor of Asian Studies in the College of Foreign Studies at Kansai Gaidai University, Osaka, Japan. She had previously taught in the Division of English at Nanyang Technological University, Singapore from 2009 to 2017. Lee’s research interests include performance studies, literature, and cultural studies. Her publications have appeared in Korea Journal, Theatre Research International, and in the Journal of Popular Culture, among other journals. She has contributed book chapters in various edited collections published by Routledge, Palgrave Macmillan, and Roman & Littlefield. Lee has also co-edited a journal special issue entitled "Colonial Modernity and Beyond: the East Asian Contexts" in Cultural Studies (2012). She is the author of Performing the Nation in Global Korea: Transnational Theatre (Palgrave Macmillan, 2015).

Tejaswini Niranjana is a professor and the Head of Cultural Studies at Lingnan University. She is the author of Siting Translation: History, Post-structuralism and the Colonial Context (Berkeley, 1992), Mobilizing India: Women, Music and Migration between India and Trinidad (Durham, 2006), and Musicophilia in Mumbai (forthcoming, 2019). Her most recent edited volumes are with Wang Xiaoming, Genealogies of the Asian Present: Situating Inter-Asia Cultural Studies (Delhi, 2015), and with Anup Dhar and K.Sridhar, Breaking the Silo: Integrated Science Education in India (Delhi, 2017). Prior to her appointment at Lingnan, she worked at the Centre for the Study of Culture and Society, Bangalore, and the Tata Institute of Social Sciences, Mumbai. She has been Visiting Professor at the University of Chicago and Yonsei University, Seoul; and a Fellow at the Asia Research Institute (NUS-Singapore), the Institut de Etudes Avancees (Nantes, France), and the Wissenschaftskolleg zu Berlin (Germany). She currently serves as the chair of the Inter-Asia Cultural Studies Society.

Paul Rae is an Associate Professor in Theatre Studies and Head of English and Theatre Studies at the University of Melbourne. He was born and educated in the UK, and before coming to Australia in 2014, he lived for 17 years in Singapore where he made, taught and wrote about theatre. He is the author of Theatre & Human Rights (Palgrave Macmillan, 2009) and Real Theatre: Essays in Experience (Cambridge University Press, 2019). His research interests include contemporary theatre and Asia-Pacific performance cultures. He is currently writing a book titled Performing Islands.

Chiayi Seetoo is an Assistant Professor at Shanghai Theatre Academy. Her interests include critical studies of dance, physical performance, Asian and Sinophone cultural studies, practice-research in the arts, and intercultural communication. She also performs, directs, and organizes artistic projects and community events. Chiayi Seetoo serves on the board of Performance Studies international (PSi), and has published articles in P[art]icipatory Urbanisms, PAR: Performing Arts Review, TDR: The Drama Review, and LEAP among others. She is currently working on two book projects about contemporary dance of Taiwan and mainland China.

Soo Ryon Yoon is an assistant professor of cultural studies at Lingnan University, Hong Kong. She teaches and writes about contemporary performance, dance history, and racial politics in South Korea and in the broader East Asian context. She is currently working on her first monograph, Choreographing Affinities: Koreanness, Blackness, and Performing Race in South Korea, which explores choreographic articulations — both staged and quotidian — of raced bodies of Koreanness and blackness in the context of global Afro-Asian relations. Her other writings appear in Inter-Asia Cultural Studies, GPS: Global Performance Studies, ASAP/J, positions: Asia critique (in press), and Theatre Journal among others. She received PhD in performance studies from Northwestern University and taught at Yale University as a postdoctoral associate and visiting lecturer in the Council on East Asian Studies and the East Asian Languages and Literatures department. 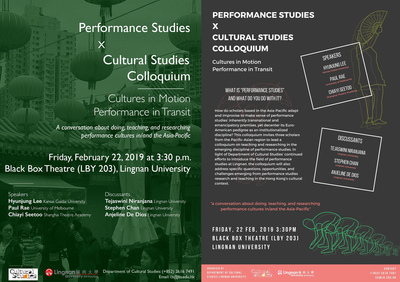