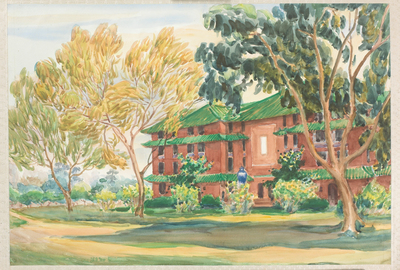 The first dormitory on the campus was completed in March 1910 and financed from funds raised from Chinese residents of Guangzhou by Chung Wing-kwong (鍾榮光) (1866-1942), a Chinese scholar who obtained a degree in the Chinese examination system at 16. He joined the Lingnan faculty in 1900 as a Chinese teacher while he also studied western subjects at the College, graduating in Szto Wai’s 1908 Class. An excellent fund raiser and a visionary, he became the first Chinese President of Lingnan University in 1927. The early Lingnan University housed both secondary and university students. Java Hall, built in 1920 was the first dormitory to house only university students. Funds for the building were secured during a fund-raising visit to Singapore, Malaysia, and Indonesia (Java) by Chung Wing-kwong in 1918, hence the name “Java” Hall.