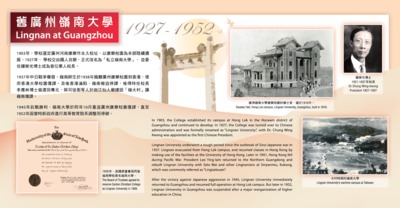 In 1903, the College established its campus at Hong Lok in the Honaam district of Guangzhou and continued to develop. In 1927, the College was turned over to Chinese administration and was formally renamed as "Lingnan University", with Dr. Chung Wing Kwong was appointed as the first Chinese President.

Lingnan University underwent a tough period since the outbreak of Sino-Japanese war in 1937. Lingnan evacuated from Hong Lok campus, and resumed classes in Hong Kong by making use of the facilities at the University of Hong Kong. Later in 1941, Hong Kong fell during Pacific War. President Lee Ying-lam returned to the Northern Guangdong and rebuilt Lingnan University with Szto Wai and other Lingnanians at Sinyanmiu, Kukong, which was commonly referred as "Lingtaitsuen".