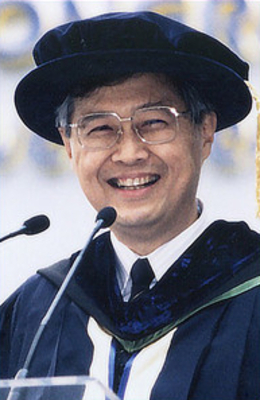 Prof Woo Chia-wei is the founding President of the Hong Kong University of Science and Technology (HKUST) who led the university to become a world-class university within a short period of time.

In 1983, at the age of 45, Prof Woo became President of San Francisco State University, the first ethnic Chinese to head a major university. He has published many academic papers and books in various fields of Physics, and received numerous awards for his professional achievements. He also received prestigious honours for his contributions to society, including the Eleanor Roosevelt Humanitarian Award from the United Nations Association, the Golden Key to the City from the mayor of San Francisco, Honorary Citizen from the Municipal Government of Shenzhen, the Gold Bauhinia Star (GBS) from the Government of the Hong Kong Special Administrative Region, and the Chevalier de la Légion d’Honneur (Knight of the Legion of Honour) award from the President of France.

Prof Woo was the first person to propose the concept of Hong Kong Bay Area in 1990s, as a forerunner of the economic development of the Pearl River Delta. He is considered the “father” of the Shenzhen-Hongkong Bay Area (GBA).

He was awarded the degree of Doctor of Social Sciences, honoris causa.