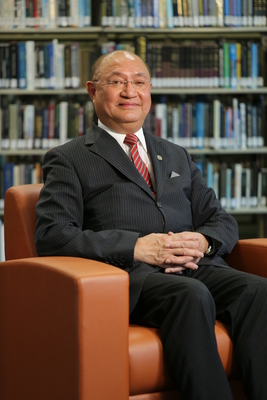 Being a leader in the dental industry, Dr Frank Law Sai-kit has joined the Executive Committee of the Hong Kong Dental Association for years and served as its Secretary, Vice-President and President (1983 to 1984). He was appointed by the Government as a member of the Hong Kong Dental Council, a member of its Examination Board and Chairman of its Preliminary Investigation Committee, as well as the Honorary Treasurer of The Federation of Medical Societies. Dr Law was a part-time lecturer at the Prince Philip Dental Hospital, the teaching hospital of The University of Hong Kong from 1982 to 1990. He was an honorary lecturer of the School of Education at The Chinese University of Hong Kong from 1985 to 1989. For a long period of time, Dr Law has coordinated free dental consultation service for non-governmental organisations, which benefitted many in need.

Dr Law had been a boarding student at Lingnan Primary School at Stubbs Road since Primary Three. He strongly believes that education is the foundation of our society. To carry forward the spirit of his alma mater, he spares no effort in serving Lingnan as Deputy Chairman and Director of Lingnan Education Organization, Director and Supervisor of Lingnan Secondary School, as well as Director of Lingnan Dr Chung Wing Kwong Memorial Secondary School. During his term of office, Dr Law took part in a large number of student exchange activities. He joined the Court of Lingnan University in 2008 and became both Chairman of the Court and member of the Council three years later, making important contributions to the University’s development and governance.

Dr Law helps people in need by fostering community engagement and has taken up a number of positions and tasks of the Lions Clubs International. He held a number of public service positions including the Central and Western District Commercial Affairs Committee (1982-1985), Adjudicator of the Obscene Articles Tribunal (1987-1990), and Member of Works Working Group of the Chinese Temples Committee (2010-2016).

Dr Law was awarded the degree of Doctor of Social Sciences honoris causa by Lingnan University.