To return or to stay till the end? Experiences of Japanese later-life migrants in western Australia

Parallel to the other big cities in Australia, Perth as a metropolitan city in Western Australia has also seen an increase in ethnic migration in the recent decades, including migrants from Japan. This paper focuses on the experiences of a specific subset of Japanese migrants - the Japanese later-life migrants living in Perth and the vicinity in Western Australia. As sojourners seeking a better life overseas, later-life migrants tend to be perceived as temporary stayers and there has been little question on their sense of belonging. However, in this study co-authored with Dr. Sachiko Sone, based on a decade of observation and follow up interviews with a small sample of Japanese retiree migrants in Western Australia, we observe that later-life migrants often debate on whether they should leave or stay in the host country after prolong years of staying. From their diverse eventual decisions, we identify four types of later-life migrants depending on their eventual decision to leave or to stay: ‘the returnee’, ‘on-going migrant’, ‘the potential settler’ and ‘the new citizen’. Through these case studies, we argue that for the later-life migrants, the process leading to their eventual decision is a dynamic one often negotiated through a sustained sense of belonging to their homeland, even in cases where they finally decided to settle permanently in the host country.

Thang Leng Leng is socio-cultural anthropologist and Associate Professor at National University of Singapore. She is immediate past head of the Department of Japanese Studies, also Co-Director of the Next Age Institute, Faculty of Arts and Social Sciences. She has research interests on Japan-Singapore socio-cultural issues, intergenerational relations and programming, aging, family, migration, gender with a focus on Japan and Singapore, as well as Asia in general. She is the author of Generations in Touch: Linking the Old and Young in a Tokyo Neighborhood (Cornell University Press, 2001), which offers an ethnography of programs designed to facilitate interaction between the old and the young in Japan. In addition, she has also authored edited several books in the field of family and aging. Her research has been published in peer-reviewed journals including Journal of Cross-Cultural Gerontology, Identities, Social Science and Medicine, and Japanese Studies, among others. 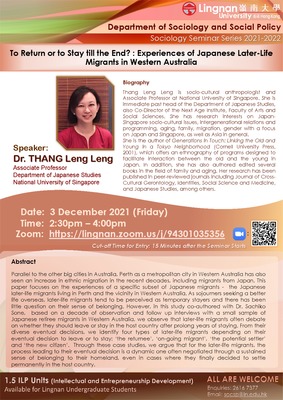 Thang, L. L. (2021, December 3). To return or to stay till the end? Experiences of Japanese later-life migrants in western Australia [Video podcast]. Retrieved from https://commons.ln.edu.hk/videos/918/