Friend or foe? Africans at the door : twentieth century military encounters between the Chinese and various African nationals at the borders of China 1900-1950

The first half of the twentieth century was marked by two World Wars, both of which played a role in the decolonization struggles of the Caribbean, Africa and Asia alongside marked “South-South” military encounters within the frame of imperialism. Men from far-flung parts of Africa interacted with Chinese nationals in various capacities on the very borders of China during a period that witnessed the rise and practice of Marxist-Leninist Socialism. A factor that played into the discourse of decolonisation, independence and models of development in Africa. The narratives of these Africa-China encounters have been largely forgotten by most countries of Africa and by the Peoples Republic of China. This paper seeks to identify through historical research the encounters that China had with people from various parts of the African continent between 1900 and 1950 in Asia. Followed by a brief description on how these encounters were perceived in Africa during that fifty-year period. The paper concludes with a discussion on the subject of memorialisation of these encounters in both China and in the independent African countries that were involved.

Clifford (Cliff) is a history researcher, curator and heritage consultant with a portfolio of projects in Britain, Canada, Qatar, Kenya, China and Hong Kong SAR. Cliff has produced numerous publications, radio and documentary programs across the world. He is best known for his work on Africans in the Indian Ocean World, especially the Bombay Africans narrative which will be featured in the UNESCO General History of Africa Vol. X. Cliff was recently featured on NHK for his work on Yasuke – the African Samurai. He is presently reading an MRes on Africa and the African Diaspora focusing on Africans in Southeast Asia 1900-1960 and is Visiting Research Associate with the University of Hong Kong’s African Studies Programme. 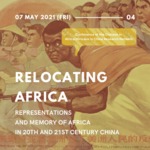 Pereira, C. (2021, May 4). Friend or foe? Africans at the door: Twentieth century military encounters between the Chinese and various African nationals at the borders of China 1900-1950 [Video podcast]. Retrieved from https://commons.ln.edu.hk/videos/875/