In debates about African debt and agency in relation to China, Angola has figured prominently, often cited as China’s largest trading partner on the continent, and recipient of more Chinese loans than any African country. Less attention has been paid, however, to how Angolan individuals may act as gatekeepers to obstruct or facilitate Chinese business in the country, and how Chinese entrepreneurs try to negotiate advantageous positions within such “collaborations.”

Drawing from fieldwork conducted in 2013–2014 with a Chinese state-owned construction firm in Luanda, this talk examines how Chinese businesses attempted to expand in the aftermath of a booming period of Angolan post-war reconstruction. Chinese entrepreneurs found that business could only be done with the help of local mediators promising to open otherwise inaccessible portals to political expediency. They shared with their would-be collaborators an image of Angola as a land of vast extractive opportunities, available only to those who could gain access through crucial personal connections. Highly aware of the opacity and potential deceptiveness of their “friends,” in part because they engaged in dissimulative practices themselves, Chinese businesspeople evaluated their Angolan counterparts less in terms of sincerity than efficacy.

The shared understandings and practices that emerge through the transactions analysed in this paper challenge images of Africans and Chinese as either antagonistic classes or cultural “Others.” Instead, my ethnographic examples would indicate a situation in which Chinese and Angolan actors become entangled in relations of both mutual benefit and reciprocal exploitation.

Cheryl Mei-ting Schmitz conducted ethnographic fieldwork among Chinese migrants and their Angolan partners while working as a Chinese-Portuguese intern translator for a Chinese state-owned construction firm based in Luanda. As a Research Scholar at the Max Planck Institute for the History of Science, she is currently exploring the development of African Studies in China, as part of the Lise Meitner Research Group “China in the Global System of Science.” 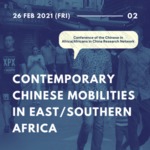