「嶺南教育機構」(LEO) 與「嶺南大學」 : 2. 校園土地供應者 : LEO and its relationship with Lingnan University : 2. LEO as the major provider of University’s campus site (II) 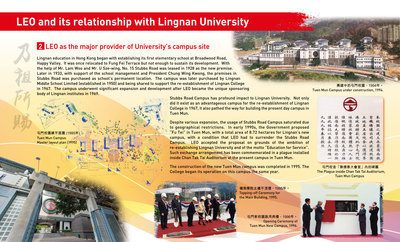 Lingnan education in Hong Kong began with establishing its first elementary school at Broadwood Roadp Happy Valley. It was once relocated to Fung Fei Terrace but not enough to sustain its development. With the help of Mr. Lam Woo and Mr. U Sze-wing, No. 15 Stubbs Road was leased in 1928 as the new premise.

Later in 1933, with support of the school management and President Chung Wing Kwong, the premises in Stubbs Road was purchased as school’s permanent location. The campus was later purchased by Lingnan Middle School Limited (established in 1950) and being shared to support the re-establishment of Lingnan College in 1967. The campus underwent significant expansion and development after LEO became the unique sponsoring body of Lingnan institutes in 1969.

Stubbs Road Campus has profound impact to Lingnan University. Not only did it exist as an advantageous campus for the re-establishment of Lingnan College in 1967, it also pathed the way for building the present day campus in Tuen Mun.

Despite various expansion, the usage of Stubbs Road Campus saturated due to geographical restrictions. In early 1990s, the Government proposed “Fu Tei” in Tuen Mun, with a total area of 8.72 hectares for Lingnan’s new campus, with a condition that LEO had to surrender the Stubbs Road Campus. LEO accepted the proposal on grounds of the ambition of re-establishing Lingnan University and of the motto “Education for Service”. Such exchange arrangement has been commemorated in a plague installed inside Chan Tak Tai Auditorium at the present campus in Tuen Mun.

The construction of the new Tuen Mun campus was completed in 1995. The College began its operation on this campus the same year.