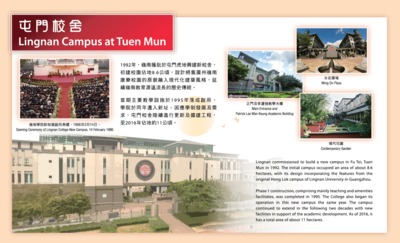 Lingnan commissioned to build a new campus in Fu Tei, Tuen Mun in 1992. The initial campus occupied an area of about 8.6 hectares, with its design incorporating the features from the original Hong Lok campus of Lingnan University in Guangzhou.

Phase 1 construction, comprising mainly teaching and amenities facilitates, was completed in 1995. The College also began its operation in this new campus the same year. The campus continued to extend in the following two decades with new facilities in support of the academic development. As of 2016, it has a total area of about 11 hectares.