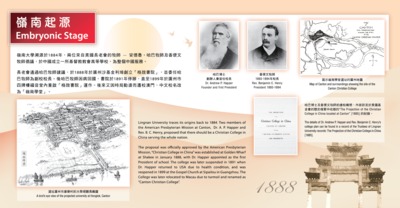 Lingnan University traces its origins back to 1884. Two members of the American Presbyterian Mission at Canton, Dr. A. P. Happer and Rev. B. C. Henry, proposed that there should be a Christian College in China serving the whole nation.

The proposal was officially approved by the American Presbyterian Mission, "Christian College in China" was established at Golden Wharf at Shakee in January 1888, with Dr. Happer appointed as the first President of school. The college was later suspended in 1891 when Dr. Happer returned to USA due to health condition, and was reopened in 1899 at the Gospel Church at Sipailou in Guangzhou. The College was later relocated to Macau due to turmoil and renamed as "Canton Christian College".